Our Story
IN THE BEGINNING - COWLITZ
by Tanna Engdahl

Before the massive deathscape of the 1800s, Cowlitz villages dotted rivers that drained into larger rivers, what is now called the Columbia watershed. From the high mountains to the lowlands, rivers provided transport with efficient and brilliantly constructed crafts. An abundance of renewable trees, shrubs, plants, stones, shells, animals and animal hides were harvested and morphed by busy hands into lodging, canoes, clothing, foods, bowls, baskets, boxes, horn dippers, toys, weaponry, and both stone and hardwood tools. Fire was an element for cooking, drying, ceremony and prairie management. Each village, according to its surrounding typography, was highly adapted to its environment and to using the life forms and resources within its range.

The spirit was felt, honored and observed in the villages. Specialized prayers were a natural development of villages and individuals according to seasons, harvests, and individual needs or desires. Participation was almost aways based around family and village participation, except when individuals had a need for alone-time with nature or one's deity.

Prior to contact, the different areas were so expansive that different languages developed as the tribal world became more populous. Constant intermarriages between near and distant villages ensured a steady flow of language interchange. The people became adept at speaking several languages, which was handy for trading expeditions and in-law connections. However, this particular lingual talent played havoc with the white explorers who often mis-identified the Cowlitz and provided a litany of mistaken identities.

The four strongholds of Cowlitz people in various areas were:

1
Upper Cowlitz, true mountain dwellers who lived in the upper meadows and prairies.

They lived in proximity to mountain streams and headwaters of rivers. They were especially adept in hunting mountain goats for food, clothing and utensils. They had a unique skill for weaving goat hair and ”sub-fur“ into blankets and clothing for families or as prized gift and trade items. Over time, their populations included a constant pattern of intermarriages between Salish Cowlitz and tribal people east of the Cascades, to such an extent, the people became known as Taidnapaum, and the mixed languages eventually merged into what is known as Sahaptin. Some now include both meanings into the word, Taidnapaum.

2
Lower Cowlitz were predominantly Salish in nature and manner of speech.

They followed a stronger pattern of culture that was related to the multi-water cultures in the rain zones west of the Cascades. They were known for their stylized canoes and custom basket weaving, and since their river harvests included exotic species such as lamprey and sturgeon, they became adept at river weirs and nets that could take large numbers of all riverine harvests. Their prairies yielded an array of root vegetables. When the horse migrated into the area, possibly brought in by the Klickitat traders, the Cowlitz became the most accomplished horsemen west of the Cascades. Their large prairies accommodated the needed grazing expanse for herds.

3
The mysterious Kwalhiokwa Cowlitz, also called Mountain Cowlitz, were people of the rolling hills of the Willapa, following the Willapa River and the lands south of the Chehalis River.

They should have been called people of the hills. They may have set up villages at Pe Ell, Boistfort, maybe even as far west as Raymond.  They were an Athapaskan speaking migratory people who probably spent an indeterminable amount of time with the Cowlitz before continuing their journey south. They too, developed words that included a mixture of Cowlitz. The last of the Athapaskan language in the Willapa Hills was heard around the 1830s. Confounding anthropologists and ethno-historians, the seven Apache tribes in Arizona and New Mexico spoke/speak Athapaskan, a language of Alaska and northwest Canada.

Today, the mouth of the Lewis empties into the Columbia River, probably less than two miles from where the largest trading village, Cathlapotle, was located. Archeological digs place it in what is now a national wildlife refuge under the management of the U.S. Fish & Wildlife Service. The refuge is located at the edge of the City of Ridgefield, and only a few miles in a straight line, to the Cowlitz Reservation. The headwaters of the Lewis River are Mount Adams, outside Cowlitz territory, but Mount St. Helens also has tributaries that drain into the Lewis River. The tribal people were similar in speech and dress to the Upper Cowlitz; however, it was the Klickitat traders traversing over Cowlitz territories that brought so much confusion into the documents of early records. The frequent trading parties were so attracted to the lovely and accommodating prairies along the Lewis that they, too, eventually melded into the Cowlitz. Early records include linguistic errors of both tribes as well as another trading tribe, the Chinook. Pressure to move the Lewis River Cowlitz over to the Yakama reservation was intense and was eventually accomplished after the Homestead Act of 1882.

Prior to invasion, each village gathered ceremoniously for a particular harvest or event. Prayers — spoken, sung or meditated — were the heart of any gathering. Harvest ceremonies such as the Salmon and Qualestay (smelt) ceremonies survived the pandemics and diaspora and have evolved among the modern-day Cowlitz as a concentration of prayers and drummed prayer songs. But they also include celebration with stories, visitation, comradery and things for children to do. More and more, ceremonies have undertaken the social inclusion similar to a large family reunion.

Potlatch ceremonies include weddings, births, naming, passage of life, tribal invitations, into the modern age of pow-wow dances, and special events in one’s life such as birthdays and graduations.

The sweat lodge was thought to be an event of the Plains Indians that spread out to tribes in all directions. However, it has been known worldwide since earliest times. Cowlitz members today practice the sweat lodge much in the fashion of the Sioux or tribes of the mid-continent Plains. It is a specialized gathering of committed adults or near adults in a small, framed lodge covered by blankets and tarps. A central fire is used for heat build-up. Steam can be produced by a small ladle of water on hot rocks. The intent is to produce a sweat, sanctified by a sprinkling of sage and cedar, accompanied by songs and prayers. The intent is to shed toxins from the body and clear the mind. At a deeper level, it rebalances the soul, psyche and attitude. Each sweat-lodge master may have a tweak of the basic ceremony.

Vision quests became a specialized passage from childhood into the adult one could or would become. Variations of the vision quest were practiced by the geographically separated areas.

Each individual sought divine guidance for a life to be well lived, and that would bring value to his/her village and to one's family. An individual would set off to find a place in a higher elevation, to be closer to a deity where one would fast, pray and meditate. One might wander a bit, seeking signs through the prayers and meditation. Signs came in the form of animal visitation, certain sounds such as river flow, waterfall, weather systems such as thunder or lightning, even the wind in the trees. If one felt an alignment with trees, such as the Holy Cedar, he might become an accomplished carver. If a girl aligned with plants or trees that were weavable, she might become a skilled basket maker. Youth kept fasting and praying until he/she encountered a sign, and his/her song was formed in the mind; it was practiced until it became part of one's persona. Likewise, some felt an urge to dance a certain way that would be uniquely his or her own. There was no time limit on vision quests. Vision quests have remained as a cultural link to the past, which some still undertake, but for the most part, modern elders, adults and youth have not had the mentorship, location or instructions to undertake such a feat.

Ceremonies and quests of any kind went dormant in the 1830s, with the collapse of village life caused by a pandemic so horrific that it wiped out about 98% of Cowlitz populations. When populations rallied: treaty pressures, tribal warfare, incoming white populations, land confiscation and the scattering of Cowlitz families disrupted the communal lifestyles that powered these cultural life events. As the Cowlitz Indian Tribe reorganized in 1912, to become a stronger governing unit, it was inevitable that the spirit of cultural traditions would eventually follow, no matter how long it took.

Indeed, those cultural traditions did follow. Today, tribal members engage in a rich cultural practice of old Cowlitz lifeways such the Smelt, Salmon, and River Ceremonies.  We join coastal tribes in Canoe Journeys on major waterways.  We drum and sing at ceremonies throughout the year and as called upon for funerals, naming ceremonies, healings, and celebrations. Moreover, The Cowlitz Pow-Wow is one of the largest in southern Washington.

As far as reorganization, and the push for recognition, the Cowlitz were denied recognition in 1923 by President Calvin Coolidge, who feared acknowledgment would require reparations for a vast amount of land taken from the tribe and given to White settlers. Federal recognition was finally awarded in 2000 and upheld after two years in appeals. When the Federal Government recognized the tribe officially in 2000, the Tribe thought of it as belated acknowledgement of a cohesive culture spanning centuries.

Without cover of Federal status, tribal members have overcome tremendous obstacles, holding firm to our remembered past as one of the largest and richest tribes in what is now Washington State. Through intentional and careful planning and economic development, the Tribe plays a key role in the economy of the Pacific Northwest. We work with persistence to ensure self-sufficiency for all Tribal members and security for future generations.

The Cowlitz Indian Tribe are known as the Forever People, Cowlitz means Seekers of the Medicine Spirit. We are a people with a rich legacy of tradition and relationship to our place in the Pacific Northwest, which continues to guide our vision as leaders in the region.

Vision quests have remained as a cultural link to the past, which some still undertake, but for the most part, modern elders, adults and youth have not had the mentorship, location or instructions to undertake such a feat. 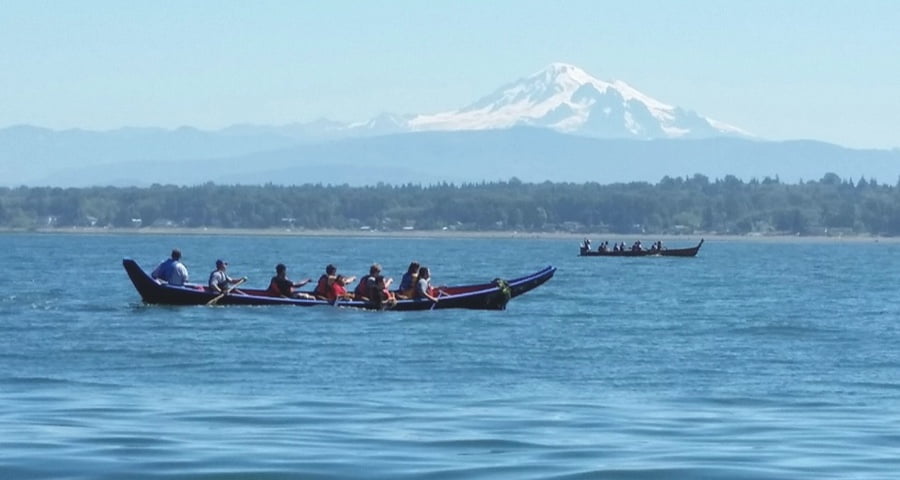