Overview of the Traditional Seasonal Round

Overview of the Traditional Seasonal Round

The annual calendar of the Cowlitz People was organized into seasons based upon the annual sequence of resource availability within ancestral lands. The People held deep knowledge of specific locations within the landscape where resources could be found, and traveled to those places to harvest and process resources at the specific times when they knew those resources would be most available. The traditional seasonal round was a method of maximizing resource acquisition, while minimizing cost.

Resource-harvesting and processing camps were frequently set up in the same location every year so that material supplies could be staged or stored at the site. Entire families would travel throughout their landscape from encampment to encampment, returning in Fall to their cedar plankhouse villages along lower elevation rivers during the coldest months of the year.

The resource-based round followed this general sequence: 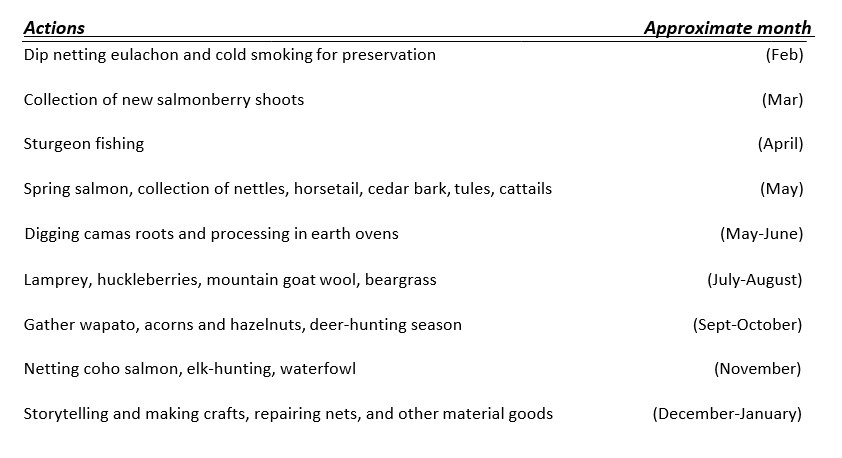 Curtis (1913) described the Seasonal Round of the Cowlitz Tribe in the following way:

"An outline of the seasonal occupations of the people affords a good conception of the manner in which they subsisted. About the first of May they abandoned their permanent winter villages and erected in the prairies at the root-digging grounds mat lodges of the same type as their cedar-board houses. Two months later, having harvested and cooked or dried their roots, they moved up into the hills where berries grew abundantly. Late in August close watch on the height of the water in the river was kept by young men dispatched from time to time on this errand, and when, usually about the first of September, it was sufficiently low to permit the construction of weirs, the chiefs issued commands to their people, who set out for their respective villages. Here the women cleaned and renovated the houses, the families moved in, and soon all were busily engaged in building the fish-weirs, of which some of the larger villages controlled two while the majority were served by one each. Weir fishing continued until the freshets caused by early winter rains forced the removal of the timbers and poles, which were carefully laid away for next season’s use.  Throughout the winter and the early spring, the salmon were taken by spearing in the smaller streams. The fish were preserved by hanging them on poles in the house and building a number of small fires beneath them. Like all tribes living on streams near the mountains, the Cowlitz were good hunters and followed the deer at all seasons." 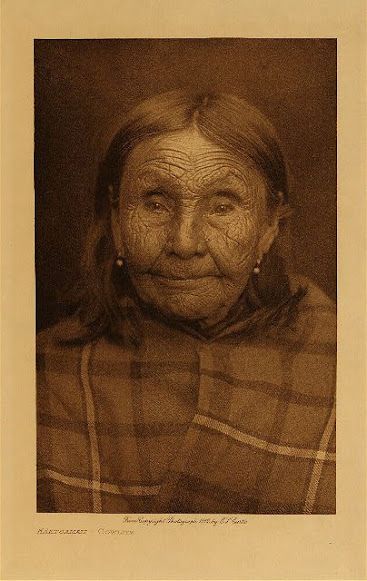 Curtis interviewed Cowlitz Indian Kaktsamah circa 1912. She was also known as Esther Millet and was about 77 when she was interviewed. In 1906 she gave a statement to Charles McChesney, noting, "My father was Wa-wha-ho-wa, and he was a Cowlitz Indian and he is dead. My mother was Karmele, who was a Kathlamet Indian Woman, and died about 49 years ago."

Kaktsamah reported she was born at the Cowlitz village of Wiyamitih ("Long Riffle"; approx Cowlitz River Mile 19, between Castle Rock WA and the mouth of the Toutle River), where there were about 20 houses. At the time of her 1912 interview with Curtis, she was living with her husband Sam Millet in Bay C